Most writers will tell you they started telling stories when they were kids. While I’ve talked about writing two stories in 6th grade and passing them around to classmates, my best stories were played out in miniature form.

In the early ’80s, my puppets, my mouthpieces were Ken and Barbie and gang. I played with the dolls for hours and thanks to regular viewings of Days of Our Lives and Dallas, I knew drama, baby. I also happened to witness my fair share of conflicts involving relatives, including at holiday dinners. Drama I could do.

I’ve often thought about all those stories I made up in my tween years and how they shaped – and for sure jumpstarted – my storytelling.

So when I stumbled upon a vintage Tumblr full of old Ken and Barbie doll pics, I wondered if it would be possible  to find my exact Ken. I knew he had real hair (well, not the plastic head hair) so I started Googling and could not believe it when I found a NEW Sport n Shave Ken from 1979 still in the box on ebay.

Honestly, you’d think I’d won the lottery – which in a way I did.  How often do you get a piece of your childhood back after it’s long gone? My memory had physically manifested. 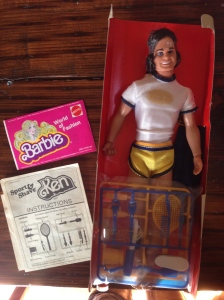 So I messaged the seller, negotiated a lower rate and within hours heard back that Ken would be mine…again.

Here he is…the guy I gave all my best (well, first) storylines to about love, heartache, dating, jealousy, fatherhood and family conflict. He’s probably also a reason I preferred to date tall, dark and handsome guys with a head full of hair but hey, psychology aside, I’m just happy to have him back.

A muse? A reminder to play? A physical totem of my creative journey? Sure. Most of all, simply special.

(Yes, the marker to draw on his beard still works and my daughter wanted to shave him, even though she never played Barbies – horrors!- and all of my kids think he’s creepy. They know nothing.)

Funny enough, my latest hero, Sterling Reynolds (Sterling & Sloane out in December), is more like Ken than most of my heroes. Sterling is complete alpha male, and you’ll certainly see a softer side, especially since I go into his point of view. I wonder how much influence my Ken had in all of my heroes? In the end, they do always get the girl.

Sloane laughed and sat upright, tucking her legs in. “Yes, it’s all of it. And it’s you, too. You turned my day around. Not that I like being saved, but today you were my hero. Not action hero bullshit, but a real man. Just one human being helping another who wants nothing in return. Thank you.”

She set the glass down on the coffee table and pulled herself up on her knees and sidled up beside him. “Come on. I saw that you have a huge vintage movie collection. Ben hates old movies except for Clint Eastwood. I was planning on watching horror movies as an eff-you to Christmas, but I’d settle for some old romantic comedies. You know like Carey Grant and Audrey Hepburn and Rock Hudson and Doris Day.”

He could smell the champagne on her lips, the faint scent of perfume behind her ear. Sterling stood up before she got any closer.  “Great idea. I haven’t watched those in ages. We’ll start with Pillow Talk. It sounds like what you have is a bedroom problem.”

Sloane shook her head. “Of course I do! I don’t have one!”

“No, that’s what Rock Hudson says to Doris in the movie. But of course he means…”

“I get it. Her sex life. But maybe she was taking matters into her own hands, too.”

Sterling sighed. “You really do have loose lips when you drink, don’t you?”

“Actually, I always speak my mind – just not in the papers. And I don’t like for a man to think that’s what I need him for anyway.”

He took her hand and helped her to her feet. They paused for a moment like that – their bodies emanating almost as much heat as the fire behind them. Her eyes had the familiar twinkle back. But she was wrong about one thing – he very much wanted something from her. 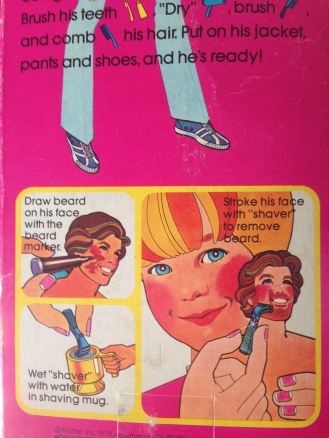